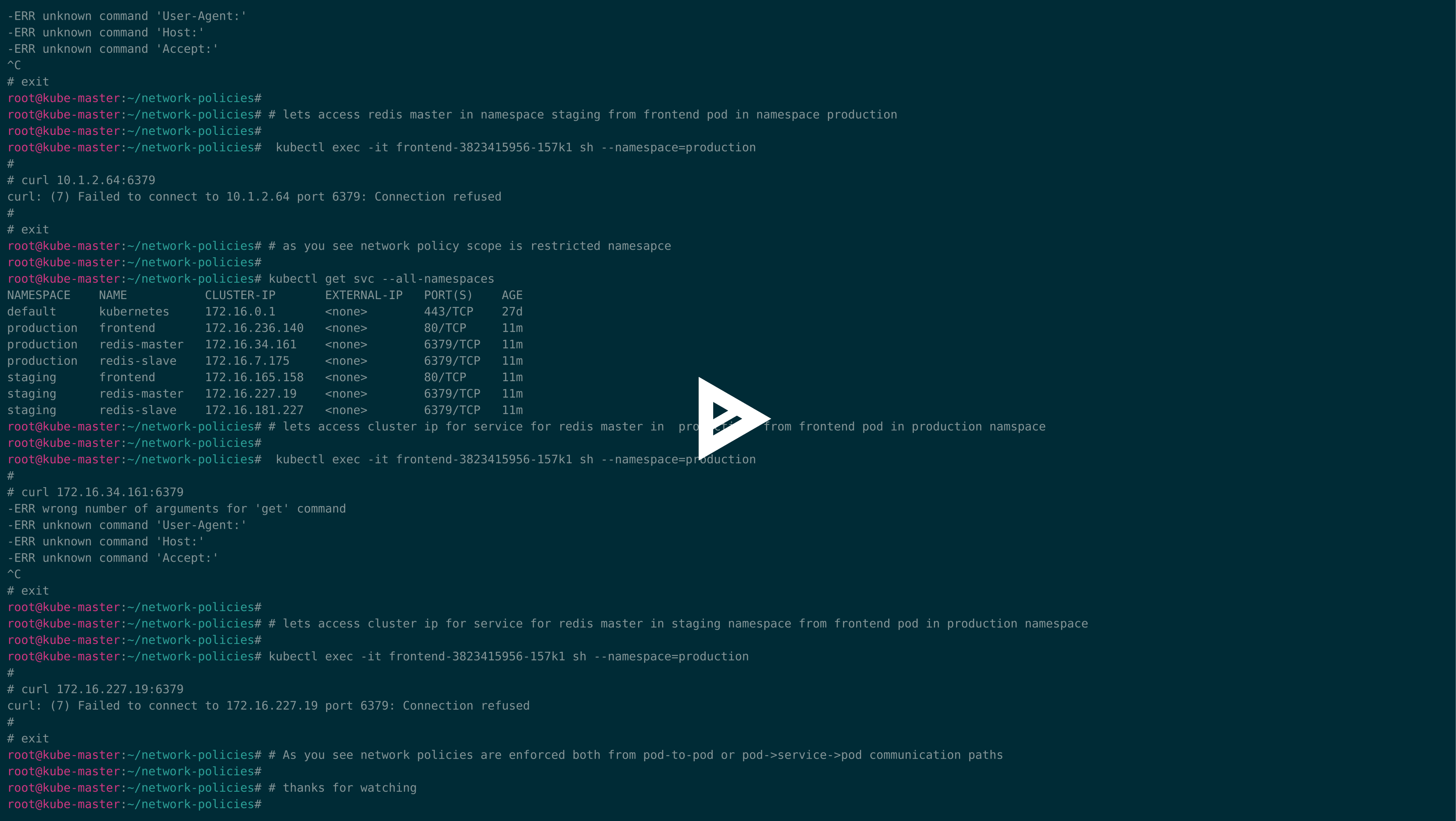 Lets quickly recap what network policies are then we will dive in to the iptables based solution aspects.

Kubernetes network policies are application centric compared to infrastructure/network centric standard firewalls. There are no explicit CIDR or IP used for matching source or destination IP’s. Network policies build up on labels and selectors which are key concepts of Kubernetes that are used to organize (for e.g all DB tier pods of app) and select subsets of objects. A typical network policy looks like below:

Network policies are declarative in nature to express application intent. So its implementation of network policies responsibility to translate the intent to configuration. Kubernetes provides a convenient way to retrieve the set of pods matching a label selector through API or kubectl as shown below.

So its easy to get the set of source pod IP’s and set of destination pod IP’s based on the matchLables in network policy spec. Essentially a network policy implicitly evaluates to be definition of set of source pods that can talk to set of destination pod over specified port and protocol. Pods being ephermal in nature, set of pods matching the label selector is a dynamic set. In later section we will see how this poses challenges in how delta changes to iptable configuration applied with minimal disruption to datapath. But first lets see how we can configure iptables at a given time to reflect current state of network policies.

Since we are only concerned about the filtering of the packets, we will use only iptable filter functionality and all the examples below refer to the use of filter table.

Since we have a rule for each source pod ip and destination pod IP combination, as you may have suspected this will blow up the chain with large number of rules. Fortunatley we can use ipset to better represent the rules and more importantly a data path that scales well. A slightly modified pseudo code to populate the rules in the chain.

Each cluster node can configured with representation of network policies with iptables as above. Destination ipset can be further optimized to represent pod IP of the pods running on specific node. Now lets see how inbound traffic to pod can be run through the network policy chains.

There are multiple data paths through which packet is received by a pod as shown in below diagram. 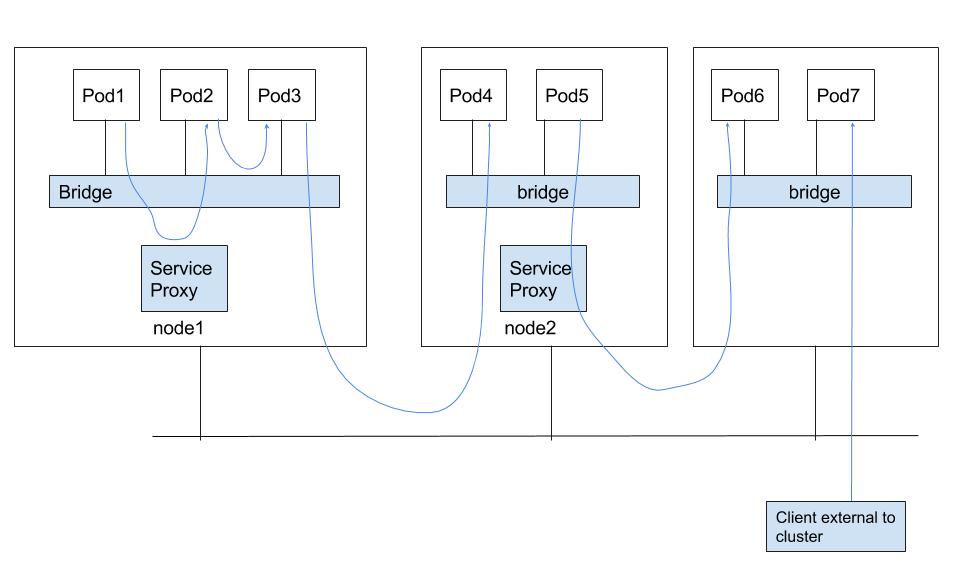 Ingress traffic to a pod can be whitelisted through one or more network policies. So its important that packet destined to a pod is run through the necessary network policy chains. Again its easier to have iptable chain per pod. Now we need to run through the traffic destined for a pod through rules in the pod specific firewall chain. We only have to consider the pods whose namespace has ingress set to DefaultDeny configuration. Also on a any cluster node, we are only concerned about the pods running on the node.

For the case #1 data path above we will need to use physdev module to match the traffic that is getting bridged locally. From iptables perspective it will still go through the FORWARD chain. For the case #2 from iptables perspective it is output packet, so it will only hit OUTPUT chain. Rest of the cases #3 to #5 all fall under the same category. Traffic will hit the FORWARD chain. Following is the pseudo code to populate FORWARD and OUTPUT chains to jump the traffic destined for a pod to pod specific firewall chain.

rules to run through network policies

We will need rules in the pod specific firewall chain to take appropriate actions. First we need to have default rule as a last rule in the chain to REJECT the traffic in case traffic destined to pod does not match any white list rules in the network policy chains. We will need a rule to permit the return traffic to the pod (for the connections which originated from the pod) using conntrack. A sample set of rules in the pod specific firewall chain would look like below. Number of rules to jump to the network policy chains depends on the how many network policies are applicable to a pod.

walkthrough how iptables are setup

Quick walkthrough of how iptables are setup on the node 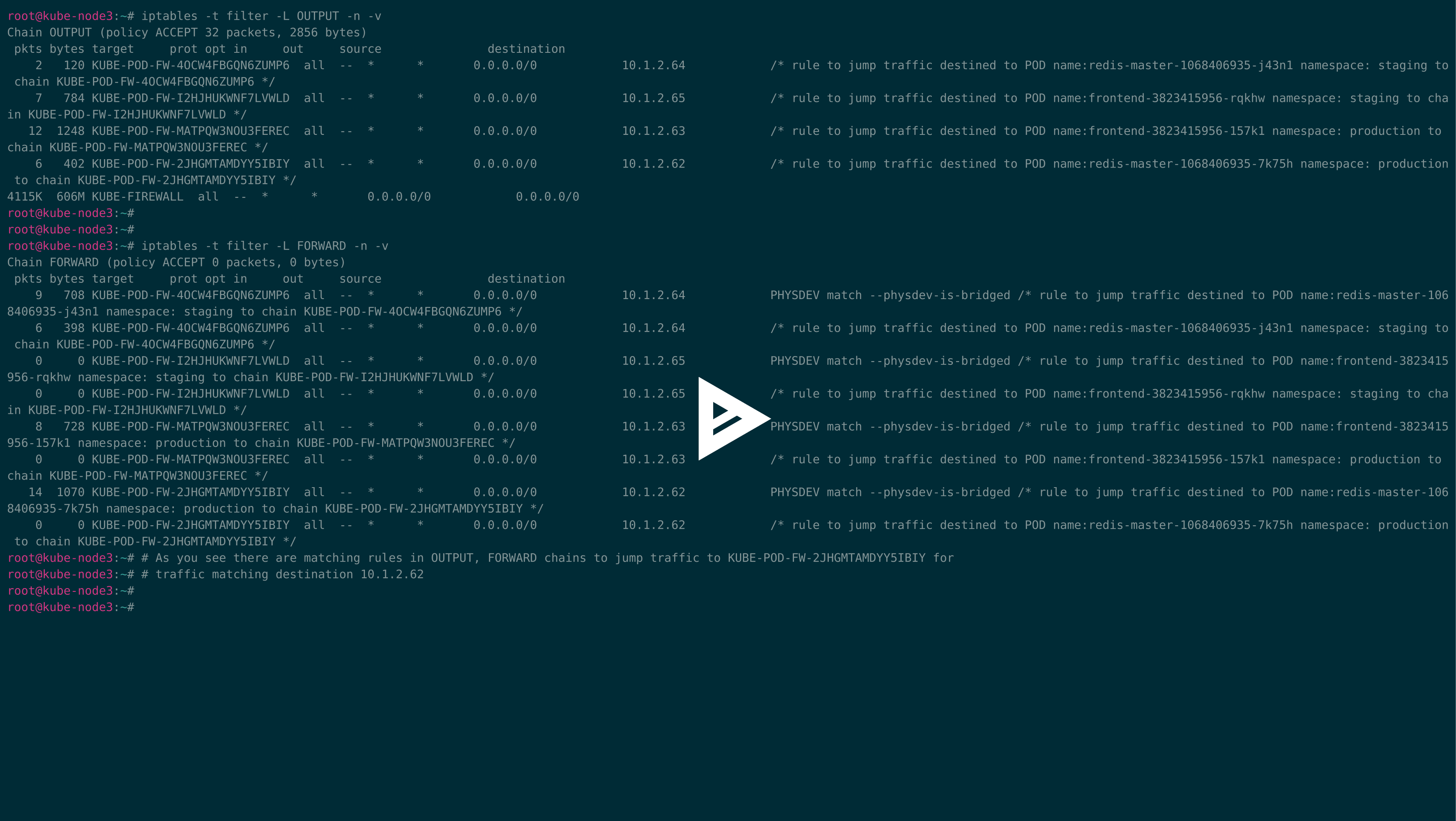 Packet flow through the cluster node goes through following path with pod specific firewall and network policy chains in place:

Like mentioned earlier network policy only express the intent. So its implementations responsibility to translate the intent to desired configuration. There are number of events that need reconfiguring the iptable so that configuration reflects the desired intent. For e.g